Following a Contentious 2021 Proxy Season, 2022 May Be Even More Challenging

The 2021 proxy season was unprecedented in the number of shareholder proposals on environmental and social issues that came to a vote—and the level of support they received. But the 2022 proxy season promises to be even more challenging for corporations, according to a new analysis by The Conference Board.

The Conference Board produced the study with ESG analytics firm, ESGAUGE, in collaboration with Russell Reynolds Associates and Rutgers University’s Center for Corporate Law and Governance.

The report warns of an increasing risk of collision between companies and shareholders, especially on lobbying (including climate-related lobbying) and the use of corporate funds for direct and indirect political contributions. Shareholders are submitting proposals focused on whether companies’ political activities are consistent with their stated positions on climate change and social issues, and the proposals in these areas are likely to go to a vote and to receive high levels of support.

In addition, companies can expect a possible further erosion in shareholder support for the election of their directors, as investors are using their votes against directors to express dissatisfaction on areas such as board diversity and ESG oversight, and, at smaller companies, with governance practices that are inconsistent with best practices at large companies. The main report provides an overview of the key areas that promise to be the focus of investor attention in 2022. The Briefs provide findings and insights for what’s ahead in the following areas:

The insights for the 2022 proxy season are based on a review of shareholder proposals submitted by proponents at Russell 3000 companies between January through June of 2021, as well as discussions with governance professionals at ESG Center Member companies. Insights from the new analysis include: 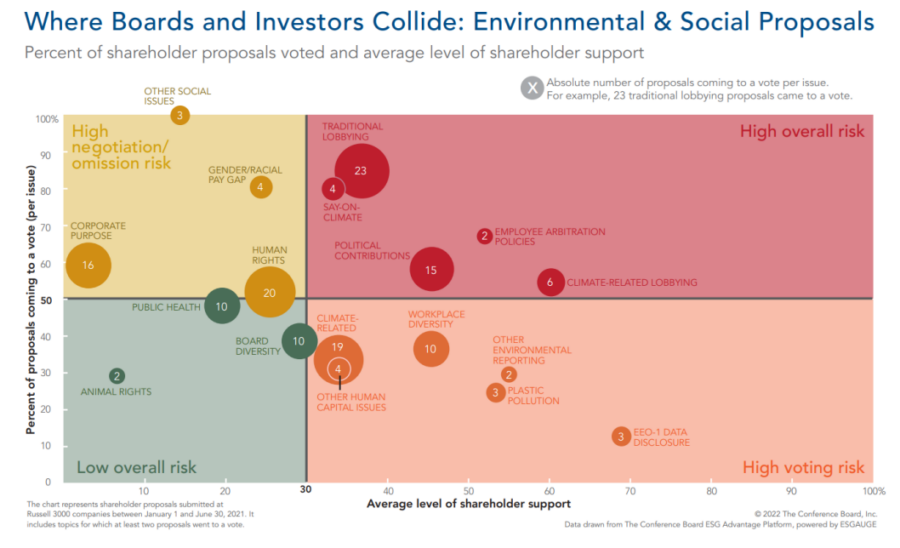 “Directors should be prepared for more issues to go to a vote in the 2022 proxy season,” said Merel Spierings, a Researcher at The Conference Board ESG Center and author of the report. “Boards should judge success during this proxy season based on whether the company has maintained constructive, ongoing dialogues with their major investors. This is more important than any vote on a precatory shareholder proposal.”

“Both CEOs and boards can get ahead of the curve on HCM concerns. A good start entails clarifying and codifying the board’s role as it pertains to HCM—and ensuring the board demonstrates its own commitment in this area,” said Rusty O’Kelley, co-lead of the Russell Reynolds Associates Board and CEO Advisory Practice in the Americas. “For instance, they should commit to long-term director succession planning that prioritizes director skill sets and capabilities while at the same time enhancing board diversity. Boards will need sufficient lead time to identify, recruit, and onboard directors with the appropriate diversity of thought, experience, and background.”

“Keep an eye on racial equity/civil rights audit proposals in the 2022 proxy season,” said Justus O’Brien, co-lead of the Russell Reynolds Associates Board and CEO Advisory Practice in the Americas. “In the year ahead, investors may see these proposals as a way to gauge the success of a firm’s diversity, equity and inclusion practices. This may be the case, especially, for companies that made commitments following the death of George Floyd.”

“In the 2022 proxy season, in addition to a focus on climate, CEOs and their boards can expect a sustained push on broader environmental topics, including water use, plastic pollution, and deforestation,” said Umesh Chandra Tiwari, Executive Director of ESGAUGE. “Proposals on plastic pollution and environmental (other than climate-related) reporting received majority support for the first time.”

“To address investor concerns in the 2022 proxy season, boards and senior management should be familiar with how their lobbying and both corporate and PAC contributions align with stated positions on issues. Doing so will help prepare companies to engage with shareholders—and may identify areas where companies can better align their public policy positions with their corporate citizenship positions,” said Paul Washington, Executive Director at The Conference Board ESG Center. “Companies should also strive to keep their political activity as straightforward as possible. The more complex the corporate political activity, the more difficult it may be to manage reputational risk. This is why some companies may choose policy over politics, deciding to limit—or avoid engaging in—political contributions.”

“Governance proposals are no longer a concern for large companies only. CEOs and boards of small and mid-sized companies are learning that their practices are being increasingly scrutinized by the investor community,” said Professor Matteo Gatti at the Rutgers Center for Corporate Law and Governance. “Now the ball is in these companies’ courts: By removing wedge issues, they are less likely to be exposed not only to shareholder proposals but also shareholder activism with a big ‘A,’ aimed at changing the board and/or the strategic direction of the company.”

About The Conference Board

The Conference Board is the member-driven think tank that delivers trusted insights for what’s ahead. Founded in 1916, we are a non-partisan, not-for-profit entity holding 501 (c) (3) tax-exempt status in the United States. www.conference-board.org

About ESGAUGE
ESGAUGE is a data mining and analytics firm uniquely designed for the corporate practitioner and the professional service firm seeking customized information on U.S. public companies. It focuses on disclosure of environmental, social, and governance (ESG) practices such as executive and director compensation, board practices, CEO and NEO profiles, proxy voting and shareholder activism, and CSR/sustainability disclosure. Our clients include business corporations, asset management firms, compensation consultants, law firms, accounting and audit firms, and investment companies. We also partner on research projects with think tanks, academic institutions, and the media. www.esgauge.com

About Russell Reynolds Associates
Russell Reynolds Associates is a global leadership advisory and search firm. Our 520+ consultants in 47 offices work with public, private and nonprofit organizations across all industries and regions. We help our clients build teams of transformational leaders who can meet today’s challenges and anticipate the digital, economic and political trends that are reshaping the global business environment. From helping boards with their structure, culture and effectiveness to identifying, assessing and defining the best leadership for organizations, our teams bring their decades of expertise to help clients address their most complex leadership issues. We exist to improve the way the world is led. www.russellreynolds.com